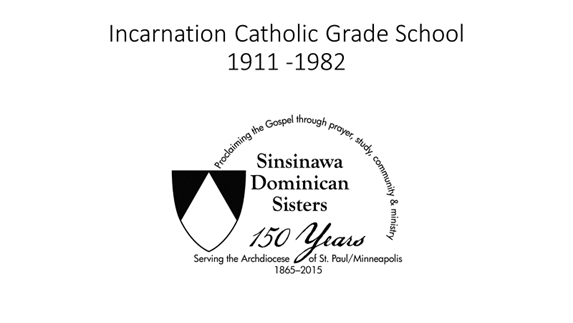 Dominican Friar Thomas L. Grace was appointed Bishop of St. Paul in 1859 and six years later he invited the Dominican Sister of Sinsinawa to open a Catholic School in the Archdiocese

The first school that the Dominican Sisters began was Bethlehem Academy in Faribault. With the success of the schools in Faribault and the urgent need for quality education, the sisters were invited to open schools in Minneapolis and St. Paul.  Holy Rosary and Incarnation Elementary Catholic Schools were the first of seven schools that the sisters established.

The decade of the 60’s, Vatican Council II and shifting demographics began a time of change wherein there were fewer Sisters in the schools and fewer vocations to Religious life. Nevertheless, the Dominican Sister continue to respond to the unmet needs of this era as they have for a century and a half. Today, they work in prisons, social service agencies, spiritual direction and retreats and programs for newly arriving immigrants. 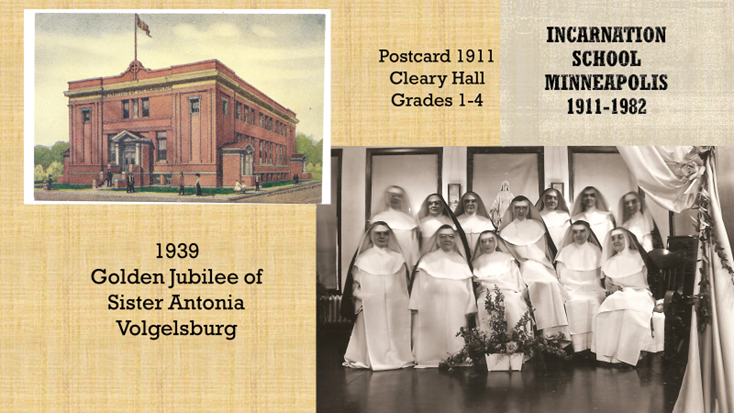 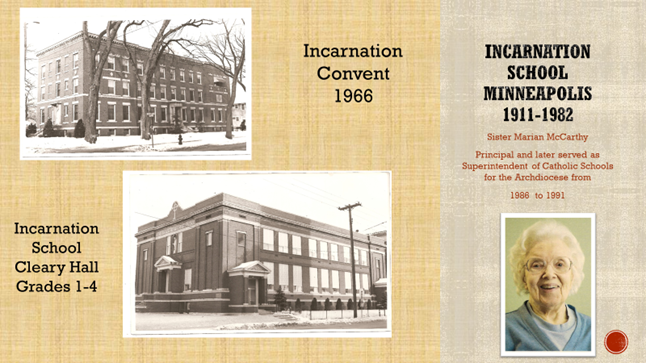 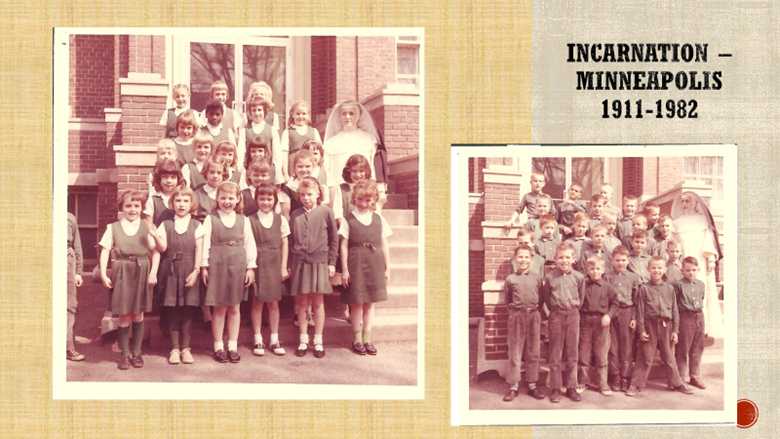 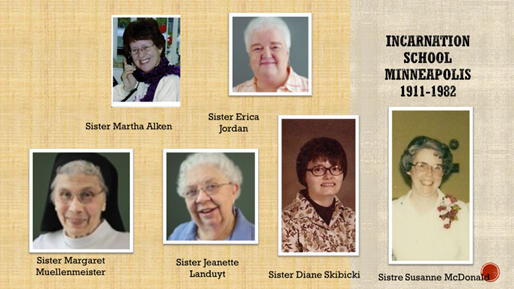 I taught at Incarnation from 1969 to 1972 in Grades 5 through 8.  We did get rid of textbooks – a challenge.  The children were inquisitive and lots of fun to teach.  I enjoyed them. I remember the parents were supportive of the new ideas that we tried.  As I recall, there were 300 children in Monihan and 200 in Cleary.

The parish was active and very supportive of the school.  I remember visiting the children’s homes that I had in homeroom in one year.  It was an enriching and informational experience. I was always welcome and gained much insight.

My years living and teaching at Incarnation were in the 1970’s when we had double grades. I taught 3rd and 4th grades in Cleary Hall and 5th and 6th grades in Monahan Hall. I lived with our Dominican Sisters in the convent across the street. We prayed and studied a lot. There were 23 of us sisters there and we had one car to use for grocery shopping and Doctor Appointments. I had a bike to use and I loved biking.

I loved teaching religion and we also had religious education classes for the public school kids.  I helped them get ready to receive the Sacrament of Reconciliation.  What I remember most about my years at Incarnation was the loving and supportive community that I lived in and the darling kids I taught.  We were all trying our best in the various roles and it showed.   We laughed a lot, talked too much sometimes and really cared about one another.

I went to Incarnation Parish Grade School starting in 1952 and graduated in 1961. I grew up on the 3800 block of Pleasant Ave. on the opposite side of the Church. I grew up with some fantastic families: the Ryans, the Rohes, the Gillespies, the Soukups, the Craigs, the Frasiers, the Longs that lived next to the Rectory, the Wrights and the Fleethams that lived on Pillsbury! I do remember that we had paper sales as we called them then, today we call it recycling. If I remember right, I think we had it three times a year. It was Sister Lucian who taught at least 50 years at Incarnation because she also taught my Mother in second grade! Mom told me, one time, after pulling me out of the 9:15 a.m. Mass by my neck... it was because she thought I was talking (it was really Greg Turgeon talking... sorry, Greg!).

I think it was in third grade, Mrs. Long started pulling us out of class to go and pick up papers at homes where people would call in to get them. There were 4 or 5 of us boys with wagons and Sister would give us the addresses of where we had to go. Some of the homes were 8 to 10 blocks away and we didn't care as it got us out of class for a while. We would arrive at the houses, and a  lot of times, they would give us treats and drinks! We loaded the wagons with our papers and proceeded to the next ones. I remember Chuck Williams, Greg Turgeon, Mike Leonard and Tim MacKasy. Here's the best thing about this: there was a shack at the end of Cleary Hall where we would deliver our papers. There were so many papers in our Paper Shack that we played King of the Hill (sometimes up to an hour). We did get into trouble a FEW times!

There was a reward system if you brought in enough papers... you would get a card from Sister with a letter from A - D. (Oh, the papers were weighed by the pound.)  After a month or so, we would be rewarded with a movie like The Song of Bernadette and several horse racing movies and, sometimes, we were told we were too loud, movies turned off and on went the lights!

I had a lot of great times at Incarnation Grade School. I really enjoyed working on the plays with Father Packard and Father Cassidy. I worked on The Music Man and then my summers were terrific! We loved working on South Pacific, Sound of Music and the King and I. Wouldn't it be fun to take the King and I on the road?! But that's another story. We loved our time there: terrific!